A Toast To Evil

A Toast To Evil (putting the ‘mega’ into ‘megalomania’)


In every underwater facility
In every old house on the hill
Or shadows and sewers of a city
In every long-forgotten tomb
In every crooked deep wood
Or in an old mansion’s secret room
In space base’s orbiting the moon’s sphere
In dark lands of ash and fire
We scheme in secret lairs
We are everywhere
We’re the evil twin that grew up without even an inch of attention
We’re the nation’s saviour who thinks our boarders need extending
We’re the spotty nerd at school who simply wasn’t cool enough
We’re the insolent Samurai-in-training who liked to play too rough
We’re the rebellious angel that was cast out and fell to Earth
We’re the alien overlord who sees this planet as his turf
We’re the one’s who rejected their predictable society
Of lacklustre, bland and compromising shelf-stacking destiny
We’re the one’s who rejected dole and bus queues
In favour of the freedom to simply destroy whomsoever we choose.
We’re not the heroes all bright and shiny
Playing at boy scouts to impress their Mummy
Defending the ordinary and infectiously boring
Simply in order to be the Number One news story
So we, the villains, are declaring war on mediocrity
With all manner of colourful variety
We’re only truly alive if we’ve got a sinister plot
We’ve got death rays and plenty of giant robots
We’ve gathered Henchmen from far off regions
And summoned armies of undead legions
Employed submarines and mechanical squids
Fused man and beasts into horrific mutant hybrids
Employed arcane magic and the supernatural
Devised grand schemes from our dark, crumbling castles
Hired assassins, ninjas and mindless goons
Drawn up blueprints for our enemy’s slow doom
We stroke white cats while you take out the trash
We clutch at globes while you clutch at straws
We use a map to carve up nations, you use it as navigation
We take pleasure in torture, you’re happy to pay off a mortgage
We have slaves who are minions, you slave for a pension
We feed our piranhas, you buy buy buy and feed corporate agendas
We’re grabbing the world by the throat and demanding the location of the Death Star Plans
We’re Ladies and Gentlemen of Uncivilised Sophistication, the lost and the damned
So raise your glass:
To capes, cowls, cloaks and clones
To sidekicks, henchmen and mindless drones
To laboratories, abandoned theatres and extravagant murders
To gloating, quoting ourselves and cackling laughter echoing, echoing, echoing down corridors

To inflated egos, hunchback Igors and cunningly concealed trap doors
To warships, revenge lists and a raised high, shaking fist
To top hats, looking flash in black and tying women to train tracks
To being fairly foul and foully fair and something rotten in the air
To the mad scientists and to the evil geniuses
To the war-mongers and the super-villains
To the dark lords, to the Moriartys, to the Skeletors
To twiddling your moustache, to time-travel and to elaborate death traps
To war on normals, destruct of pompous heroes and a desire for the world to fear us
So please repeat after me:
To ILL WILL
To WORLD DOMINATION
To EVIL 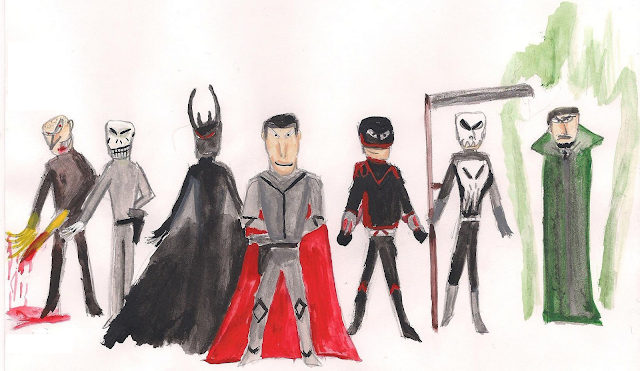 As Of Today This Is Facts

So just a quick update as to what’s going on in the Henry School
I did an ace little gig with Copasetics (http://www.facebook.com/?ref=home#!/copasetics) and Red Mercury (http://www.facebook.com/?ref=home#!/redmercuryuk) both doing acoustic sets over in Leeds for my good mates in Leeds Union Punk & Ska Soc.  Stuck to the louder, political poems and seemed to go down well with the friendly crowd.  My reworking of Evan Greer’s Go Call Fema (I’ve dubbed Go Call EMA) got the best response yet.  I got everyone to scribble their favourite lyrics on a sheet of paper and it broke up the night nicely.  An had a few free drinks which is always lovely.
I’ve been confirmed to be doing some stuff for the acoustic stage at Strummercamp, Manchester, at the end of May, more details to follow but I’m super excited and already planning.
Also, if you don’t already know, I first performed poetry ever in the history of ever at the Big Youth Theatre Festival 2007.  That was hosted by the National Association of Youth Theatres who I also work for as a Sector Development Associate (flashy).  But we’re in deep financial trouble, you can read more info here but please sign the petition and do what you can to support NAYT and the good work it does:  http://www.facebook.com/?ref=home#!/event.php?eid=193992633971675

I’ve never been the biggest know-all about Arts Council funding, but it’s always been quite disproportionate I’ve found.  Bureaucracy seems a means of deciding how to fund non-bureaucracy causes and projects.  I think the system needs a decent rattle, a shake-up, but the big enemy is, of course, the ConDems.  I hate always coming back to the same old enemy and the same old rant and the same old rhetoric but at the end of the day you have to ask how they can afford to flood money into bombing Libya and sending troops t Afghanistan but can’t afford to support young people doing life-enriching things like theatre and performance that change your life, and change you.  Unlike the ConDems who aren’t changing people, they’re keeping us static.
Rant rant rant.
Posted by Henry Raby at 13:22 No comments: