A Little & A Little Adds Up To A Lot

This weekend I was privileged enough to perform at The Little Festival of Everything, the brainchild of Alex Wright (Belt-Up and Flanagan Collective) and Tom Bellerby (Pilot Theatre).  The setting:  The Fauconberg Arms in the small North Yorkshire village of Coxwold.  The plot:  To provide arts to a small community and allow companies to network and test material.  The cast:  Theatre companies, performers, musicians and poets from across the country perform in the tiny pub to local and travelling audiences.
I wrote a poem about it, which I think sums it all up:
There was a little bit of sketch comedy when a man fell into a chasm
Two writers in a restaurant trying to out-do the other one
There was a little bit of music, the ugly sister’s side of the story
And foot-stomping, fist-swinging, hot dancing folk music glory
There was a little bit of poetry, lines written and read
Conversations with a copper who was also her Dad
There was a little bit of story-telling, William and Polly in the stars
Smiles on faces when we found out drinks were free at the bar
There was a little bit of heroism from tinfoil armoured knights
I had dinner with Dr. Higgs and I don’t think he’s quite right
There was a little market stall, a little chiselling of stone
A little filming too to tell the whole world what we know
That a little and a little and a little adds up to a lot
Going on in this friendly, old North Yorkshire pub.
So please check out 6 Lips Theatre, Snickelways Theatre, Hannah Nicklin, Tucked In, Whitebone, Forward Theatre Project to name but a few.
I think that the event really tapped into the ‘folk’ element of theatre and poetry that we forget amongst the busy hustle of London and the rainy leaflet-driven world of Edinburgh.  To perform to a small handful of people in a small room in a small pub can achieve so much, when said show/pub/village/room is full of appreciation, friendliness and love.  Poetry and acoustic music and theatre can pretty much be performed anywhere, all you need is an audience, it’s a very rootsy ideology. 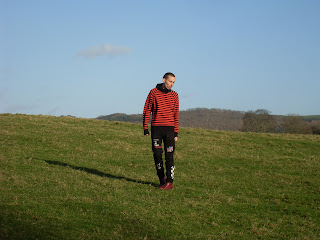 Also, remember I’m doing a gig this Thurs, by which I mean physically putting it on off my own back, so please come down, it’s Franz Nicolay, ace acoustic musician, and Chris T-T, protest music artist, plus Copasetics and Helen Chambers.  City Screen Basement, £6, starts 8pm, Dec 1st:  http://www.facebook.com/#!/event.php?eid=294161147279011
Posted by Henry Raby at 03:54 No comments:

"When they say cut back, we reply: March, Strike, Poetry-ise"
Just read Dorian Lynskey’s article in The Guardian about the current protest music scene (http://www.guardian.co.uk/music/2011/nov/10/protest-music-akala-grace-petrie?newsfeed=true).  Made me think about poetry and politics.  I want to talk about a point Grace Petrie has hit the nail on the head here, to quote from The Guardian:
“The challenge, she believes, is to convince people alienated by mainstream politics to feel empowered in other ways. ‘What I'd like to achieve through my songs is to put it into a language that people who are new to politics can understand. There's not much to be gained by singing to rooms full of lefties who agree with me already.’”


Chris T-T has encountered this problem too, and has written the song Preaching To The Converted.  Itch from the King Blues has said more or less the same thing.  Who changed more people’s opinions, chart-toppers The Jam or The Clash or underground Anarcho-Punk bands like Discharge or Conflict?  I bet Anarcho-Punks are more dedicated to politics than fans of The Specials, but the number of people who bought and were stimulated by Ghost Town greatly outnumber the punx.


So, if we are talking about empowering a mainstream audience, please allow me to explore the medium of poetry and poetry open mics.  For poetry, it’s not really all that common to hear a politicalish poem here and there at open mic nights or slams.  We poets are, by nature, going to be upset with authoritarian government impeaching on our artistic liberties.  And, even worse than the musicians, we own a notion that we have something essential to say to the world.  And that the world wants to listen.  But we do have a fair whack of history behind us.  We have Shelly’s Masque of Anarchy to back us up, and the anti-war poems that emerged from the First World War.  We have William Blake.  We’ve got Allan Ginsburg.  We’ve got The Lost Poets, Jack Mapanje, Gill Scott-Heron, Ian McMillan, John Cooper Clarke and Attila The Stockbroker. And shout-out to less known fellows Captain Of The Rant, Cat Brogan, The Ruby Kid, Kate Tempest, Monkey Poet, Chemical Poets, Luke Hoggarth, Martin Dawes and Young Dawkins.


But in all times where there’s clearly a mass movement, an injection of inspirational art never went amiss.  Coming from a theatre background, I’ve never been comfortable in going down the Emily Dickinson route of keeping my poems locked away privately.  Reading aloud to a crowd, words can stir the soul to thoughts and actions.  Like music, a poem read live is one of the most powerful tools we have in changing the world.

Reading political poetry aloud is not without its traps.  Perform a poem with too much aggressive politics, it makes the room uncomfortable.  Talking about violence, anarchy, socialist revolution and standing on a chair screaming your mouth off would be totally out of context.  And rightly so, poetry gigs are usually in a cosy back room of a pub or small bar, maybe even theatres or libraries.  Without the drive of music backing the work, it can fall embarrassingly flat.  And worse, it makes your issue seem like an over-zealous, extremist, radical and alienating affair.  But, as Grace says, it’s not about preaching to the converted.  It’s about creating accessible art that engages people and inspires them to perhaps take further action.  Like Sonic Boom Six’s Kids Of The Multi Culture, The King Blues’ Save The World, Get The Girl or The Jam’s Town Called Malice coming on the radio with a catchy hook, a poem in the right space at the right time has such incredible power and energy it’s no wonder poets and artists have been feared in dictatorships around the world.
So if you’re thinking of joining the foray and writing a political or protest poem about current issues, here are my thoughts.  I’m far from the most experienced ‘political poet’ out there, if anyone’s interested in writing some protest poetry, here’s some vague advice:
·         Don’t force it.  Allow the poem to come organically.  Let the thoughts mull around in your head.  Wait for inspiration; else the poem lacks that authentic element.  Don’t worry, watch the news enough and read newspapers you’ll find your spark.
·         Make the poem into a story.  Stating the facts is boring and too much like a speech.  Focus on a character, a situation, an emotion.  Make us care about the human issue.
·         Believe in what you’re saying.  Don’t talk about violence if you don’t agree with violence.  Don’t be naively optimistic if you feel somewhat cynical.  All honest individual feelings give your poem weight and avoid it becoming meaningless propaganda.
·         Have a read about issues online.  Look at pictures.  Go down to an occupation, picketline or march.  Talk to people.  Immerse yourself in a vibrant world.
·         Take delight in feeling like your poem will change the world.  It won’t, but it may well change people’s opinions.  Far more exciting for an artist if you ask me.
Anyone with some thoughts, please let me know suggestions or ideas.  Drop me an e-mail henrythepoet@btinternet.com or on my FB www.facebook.com/henryrabypoetry, I’m always looking for different ways to write and be inspired to write.
Here’s a few examples of protesty/politicalish poetry.  My poem Protest Hugs (which you can see here:  http://www.youtube.com/watch?v=g-xCWGKNhD4) is a love poem in disguise, with some daft images it sort of works at open mic nights depending how it’s delivered.  Same for my new poetryzine The Unkettleables.  Here’s me performing at the rally for June 30th 2011 strikes, far more aggressive but the audience interaction works well with a crowd who are used to chants:  http://www.youtube.com/watch?v=UF_4dxnR_-Y.  I remember Inua Ellams reading a poem that was heavily narrative-driven, focusing in on individuals, both police and protestors.  Luke Wright’s The Vile Ascent of Lucian Gore & What The People Did (http://www.lukewright.co.uk/books) is packed with humour.
Poetry, like all mediums, is our tool to inspire and engage audiences.  If poetry is meant to reflect the beauty of humanity, then I assure you there is nothing more beautiful than people unified.  And if you think the movement only has frenzied hatred, then it’s your responsibility to inject it with some love and poetry. 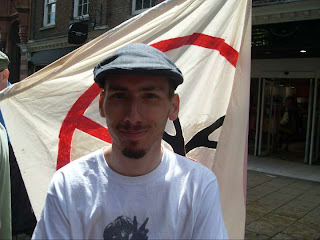 
There.  Now grab a guitar/pen & paper and do it yourself.
Posted by Henry Raby at 16:34 No comments:

When you’ve been kettle tight by police,
So close its nose-to-armpit
And you really badly need a wee
And there’s not even enough room to hop from one foot to the other
And you’re human rights have been abused
Because they won’t even tell you that night’s X-Factor result…
You call…
﻿
﻿
A new poetryzine, Unkettleables is a 14 page story about a hardy group of kettled individuals attempting to escape from a police blockade.  However their methods involve pogo sticks, space hoppers, catapults and a legion of pigeons to slip past the police lines.
Written by me (Henry Raby) in the spirit of humorous punk poetry and lovingly illustrated by Lizzie Alderdice, this ‘zine is 100% DIY style.  The story itself is a like a fusion of Doctor Seuss and Shelly’s Masque of Anarchy.  A entertaining read anyone who’s ever been on a protest or anyone who enjoys surreal little stories.
To grab a copy simply drop me (Henry) an e-mail at henrythepoet@btinternet.com.  They’re priced 50p to cover printing/time/stapes/ink etc, plus however much P&P will cost, as wel accept Paypal.  I have them at most of my gigs as well.
This is part of the Snapping Turtle Press bibliography, which includes two compilations of poems my myself, Lizzie and other poets, both 50p each.
Cheers J
Henry

Here's some examples of the 'zine: 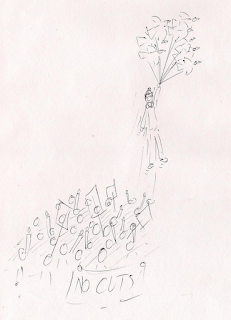 someone else suggested balloons.  Admittedly some read Congratulations but there was no call for celebration too soon. 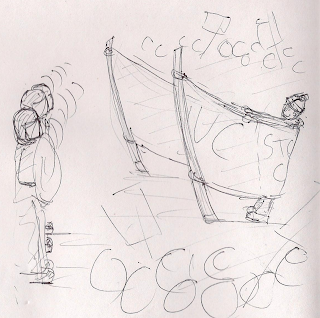 His design for a makeshift catapult was fairly ill-conceived, whilst his slingshot made from banners and flags needed to be seen to be believed.
Posted by Henry Raby at 13:20 No comments: