Does the poet grow Beard, or does the Beard grow [the skill] of the poet?
Is there a direct correlations between the length and strength of a poet’s Beard and their Words?
Can you define poets into subcategories of genre based upon their facial hair?
Some of these questions are for a longer dissertation.  Possibly a PhD study.  Talk show.
But here are some of my fav Beards on the poetry scene, and the faces, mouths, tongues and brains that sit, tight, protected behind the hairs like gnawing tigers in jungles of Saying Things.

Jack ‘Jack Dean’ Dean
https://www.facebook.com/jackdeanwriter
@MCJackDean
Theatre-maker and word throwing Jack Dean has an imagination like a vicious animal constantly sniggering, jigging and rerigging mighty pirate ships bound for the world of Wha…?!  When he performs, your brain feels like it’s Wonder Woman, arms flailing in trying to catch each bullet flying forth with your bullet-proof magical bracelets.  The bullets are Jack’s words.  It’s no surprise then, that Jack’s Beard is like a fuzzy Critter clinging to his chin.  Not so wild it could be a threat to you, but possibly a danger to your lower brain functions, to the darkest recess of your imagination, to your children and their children.
Beard rating:  10/10

Dan ‘Nerdsmith’ Simpson
https://www.facebook.com/dansimpsonpage
@ DanSimpsonPoet
Dubbed by many, if not all, as The Bearded Blur Of The Edinburgh Fringe 2015, Dan is one of life’s Doers, a man with lots of spinning plates, lots of skills and lots of energy.  How he took the time out of his busy schedule to grow his Beard, who, if none, can say.  Perhaps some kind of chrono-structural-warping serum?  In any event, Dan’s poetry is packed with wordplay, carefully co-ordinated and crafted with the same pains as Administrators construct their oh so important spreadsheets.  This precise geeky care is reflected in a highly preserved and prized Beard that all 13 year-old nerds dream of one day obtaining.
Beard rating:  10/10

Monkey ‘Matt Panesh’ Poet
https://www.facebook.com/monkeypoetuk
@Monkey_Poet
Watch out!  He’s about!  The madcap antics of Monkey Poet belong on some kind of television show broadcast kate at night, beloved in cult circles by stoners and your brother’s strange mate.  Monkey poet is all limbs and spittle, an assault of words, most of them either rude, crude or both.  Monkey Poet fuzzy beard is a loveably sprawl of tangled barbed-wire, the kind of Beard you might lose your kite in.  Behind that smiley friendly face often see down Niddry Street with wise/safe advice and pint/two pints in hand(s) lurks the filthy mind of a manic mucky monkey and this is reflected in Monkey Poet’s Beard, scruffy but lovely, warped but warm, hairy, a wee bit scary.  Highly sweary lumberjack.
Beard rating:  10/10

Tim ‘Honours The Beard’ Clare
@TimClarePoet
You know when you’re out and about on a dark story night, and you see a man build an effigy in the local park?  When you see them curse the Gods up high, tear off their clothes in a fury to match the heavens themselves? Then, with all the rage of Hell, you see the man set the effigy alight and dance around the flames like a small child at a Wedding Disco?  Then, you realise, in the light of the flame, the effigy turns out to be a twig-based replica of YOU.  Then the man turns around, catches your eyes and your brain screams RUN?  Well that’s what it’s like watching Tim Clare perform poetry.  And his Beard, at first glance, is fairly short, trimmed, neat and acceptable.  But then, on closer inspection, it’s the kind of Beard that could snap at any moment, grow like a Beanstalk, reach out and strangle your brain.  In a good way.
Beard rating:  10/10

Stu ‘Free Stone’ Freestone
@StuFreestone
https://www.facebook.com/Stu-Freestone-Spoken-Word-Poet
Stu doesn’t have a Beard, he kind of has a little bit of stubbly fluff.  That’s OK, cos we like him regardless.
Beard rating:  10/10

Henry ‘Oh yeah, that guy from York, yeah I think I’ve seen his stuff on YouTube, and I think he Tweeted me once.  His Beard’s is a bit weird; it’s all scruffy and tangly.  It looks like for a week at Uni back in 2010, he didn’t shave and it just kind of grew from there.  It sticks outwards rather than downwards, and it’s quite patchy but to be fair if he didn’t have it, he’d look like a 16 year-old. ’ Raby
The plug socket for my shaver doesn’t work in my bathroom.
Beard rating:  10/10

Note: All Beards are wonderful on any face, man, women, all genders or no gender.  No Beards are also great.  Bodies are great, and body/hair shaming sucks. 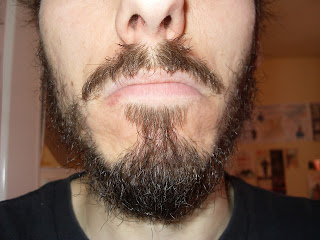 Email ThisBlogThis!Share to TwitterShare to FacebookShare to Pinterest
Labels: Poetry

Edinburgh :  The Story of Edinburgh

The first time I went to EdFringe was 2009.  Remember those dying days of Brown, when selfie sounded like a cute way of saying LONELY and the world waited with bated breath whether Harry Potter would survive the next, and last, two films?

I then went and worked teching with C Venues in 2010, and again with Pleasance Venues 2011.  Both times I had a great time, the work was hard and the rewards far from monetary but it was a great experience for anyone just out of University looking for a fun summer.  But I was a techie, and I was bursting to be recognised as an artist.

In 2012 I took my solo show, Letter To The Man (from the boy) with support from Pilot Theatre.  If setting up a venue, teching 10 shows a day and then stripping it all down sounds hard, then it’s nothing compared to the emotional rollercoaster of making a show, putting on a show and then dismantling the show.  And yourself!

The next few years I visited the Fringe to do scratches or see friends or catch the odd show, with the additional open mic or slam slot.  Then, this year, I kinda got the taste to return.  To take something and once more try and prove a worthy artist in the arena or performance.

I made my show, Up The Nerd Punks, from a collection of pre-existing poems and wrote some new ones around them.  It felt good and artistic, but it didn’t get in the way of my other projects for The Laurence Batley Theatre, Hull Truck or York Theatre Royal.

EdFringe was very fun.  I did x2 hours of flyering a day, which made me feel good when hardly anyone showed up, because frankly I went with the old punk adage:  At Least I Tried.

♫ At least I f**king tried. That’s the only eulogy I need ♪- Frank Turner, Eulogy

Last night, me and some chums watched Anvil:  The Story of Anvil.  It’s about some old metalhead rockers from the 80s trying one last time, having one last attempt, putting all their hope and faith into a dream of making a glorious metal album.  And all the way through, lead singer Lips has a driving hope that you just gotta believe, after 10, 20, 30 years, ya just gotta keep going and at the end of the day, if you don’t make it, then at least you can look yourself in the mirror.

♫ Metal on metal, it's the only way, to hell with tomorrow, let's live for today ♪ - Anvil, Metal On Metal

Anvil’s problem is they come from a school of music which measures success by proportions.  Their idols were Black Sabbath and Led Zeppelin, their peers were Motorhead and Bon Jovi, their successors were Metallica and Anthrax.  Stadiums, festivals and grand gestures.  They are almost punks, they have a DIY gusty attitude but still search for a manager and a major label to accept them.

I think that the ‘majors’ of EdFringe are pretty obvious, not only do they rules the advertising and the reviews, but geographically they control space.  I found my place on the Fringe of the Fringe, in a small venue called the Stafford Centre the ‘other side’ of town.  The staff were lovely, the venue was just right and the audiences that came were there because they wanted to see a scrawny punk make jokes about Star Wars for 50 minutes.

I could not have gone to the Fringe if not for the DIYness of the PBH Free Fringe.  I don’t think I would have wanted to.  I don’t really want to play stadium gigs.  I’m not of the metal school that says louder the better, bigger the better, badder the better.

I’m a punk, admittedly a nerd punk.  For me, scale doesn’t matter, but attitude & intention does.

I do want to look myself in the mirror.  Sometimes that’s hard.  But the lovely audiences, lovely guests I had, lovely staff at the Stafford Centre, the folks who hang at Forest Café, lovely PBH poets, lovely bar staff at the Banshee Lab and lovely random folks on the Mile also flyering who stopped for a natter were a huge amount of reinforcement.

Love you all x

(oh and if you’re the person who snapped a photo of the human pyramid at my last show, please please please send it along henrythepoet@btinternet.com)
Posted by Henry Raby at 07:11 No comments: