The Unspoken Rule of Spoken Word

Last night myself and Stu Freestone presented our 11th Say Owt Slam at the Basement, 23 months after we first started in October 2014.  It’s been an enormously fun time giving a platform to local and travelling poets and showcasing some of the breath-taking talents across the UK with guest poets.

It’s been a long road learning about promotion, comparing, marketing and performance and sometimes in the haze of drinking in Dusk afterwards I can forget those lessons and the need to record them.

But one thing I noticed at the Slam last night was all but one of our poets read from the page.

There are plenty of reasons why a poet would want to read from the page.  I’ve seen Ross Sutherland use a notebook as a prop, despite the fact he knew the poem and revealed the page was blank, in order to play with the concept of a story-teller.  John Cooper Clarke and Rob Auton use a huge overflowing notebook of scribbles like a giant tome of blurted thoughts matching their styles.  Poets might want to use the page as a way to emphasise the literary-ness of their work, or even plug their book by visually using it.  The poem might be work-in-progress so no point learning it just yet.  But, at the end of the day, the most likely reason we poets read from the page if we simply haven’t learn out poem.

This is not a swipe at any poet, especially the ones last night, who read from the page.  It’s scary enough getting on a stage in front of a crowd to express yourself, especially hard if it’s a slam and at the end 5 strangers will judge your performance.  And our winner did read his 2nd round poem from paper, so page poetry =/= loser by any stretch.

Plenty of times I’ve not learnt the poem.  I’ve been guilty of trying the poem without fully practising, only to scarper into my pocket for the print-off like clutching for the lifebelt, drowning in a sea of forgetfulness. 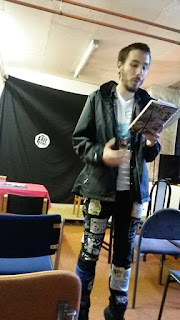 Sometimes you just can’t learn a poem, and that might because of your mind, your time or even the fault of the poem’s ungraspableness.

So here’s some offhand thoughts about reading from the page:

1.  It has the potential to root you.  If you’re a poet whose feet end up doing the awkward dance on stage, it means they won’t wander.
2.  It can give an aura of authority as a story-teller or literary crafter.
3.  It draw attention to the poem rather than the performer, giving focus to the use of language.

But on the flip side:

1.  It limits your hands, which are an useful expressive tool.
2.  It means your eyes, and mouth, are face-down, meaning less connection and limiting vocals into the mic.
3.  It creates the (false) suggestion you don’t know the poem or are less invested in the poem.
4.  If it gets lost, damaged, the lights make it unreadable or it rustles you’re in trouble.

So I would always suggest if you are to read off the page, get a notebook.  Cover it in stickers or doodles, or get one slick and impressively smart.  Make it appear like your brain physicalised, a wad of papers or a precious tome.  Use it as a prop.  I know that people read off their phones, again, I have read off my phone and I get we live in a digital age and I also get that not everyone can afford printers or printing costs, but for every problem there is with paper, reading from the phone (or other electronic device) adds a devilish extra issue:  it looks like you didn’t go to the effort to even print off the page.  Obviously this is not true, you could know this poem inside-out, back-to-front, intimately and beautifully connected with this piece.  But the casualness of a phone give that extra element of suspicion from the audience.  Poetry has such raw live connecting power beyond connecting to Facebook.

The audience are your friends, but audiences also make assumptions.  In theatre, we understand signifiers.  Colours, such as purples and greens, detonate villains, whilst reds and blues denote heroes.  Status is ‘read’ through action and stance.  Characters with swords are warriors, characters with flowers are lovers.  Put an old character and a young character on stage we assume they are related.  The stage is a canvas which we interpret signs and symbols.

So last night I presented as a scrawny guy in an Anarchist t-shirt and patches on his trousers which probably meant the audience expected political/protest poetry, so I tripped up the audience up by doing a poem about dinosaurs.  Scott, our guest last night, tripped up the audience several times with awkwardly graphic but hilarious tales, like his piece Coitus Interuptus, and that’s where some of the humour can come from, being surprised and belaying expectation is one of the funniest, or even touching, experiences audiences can have.

So subsequently, if you come to the stage with paper on your head, the audience are already unpacking this situation with expectation and assumption, and you can use the page to your advantage. 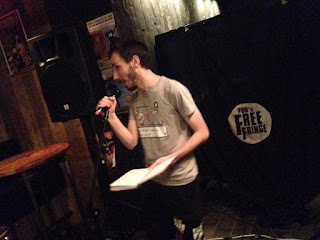 When I did my EdFringe show, Up The Nerd Punks 2, I read a fictionalised tour diary from my notebook, which broke up the more energetic non-page-read performances.  I also read a poem I’m Sorry I Missed Your Gig from the notebook, but cut up the piece so it flopped out of the notebook like a scroll.  Cheap laugh, but just gave reading from the page an extra dynamic.  After years of trying to resist the page and just learning everything, I see the potential of using the page.


So I am not going to say: “Just go learn your poems!” because everyone approaches the text and performance in a different way, but I will say, whether poem mic or (indeed especially slam) do consider how you are presenting yourself and, inevitably, your poem to the audience.

Email ThisBlogThis!Share to TwitterShare to FacebookShare to Pinterest
Labels: Poetry