I Am A Poseur And I Don't Care: Punk & Confidence part 2

Someone recently suggested to me that, presumably, I don’t dress as a punk for ‘aesthetic reasons’. 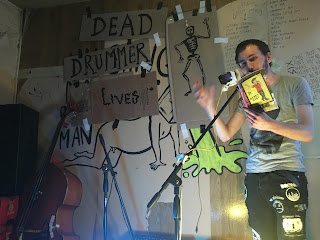 I’ve always felt like my love for wearing band t-shirts and patches of bands was to turn myself into something of a cloth-billboard.  To represent and give a platform for the bands that I appreciated.  I wrote a blog about it some three years past.

Clothes have always been an integral part of certain parts of punk.  The Ramones uniformity in their leather jackets helped further the myth they were all brothers, and helped stylised the ‘family’ aspect of their music, attracting the weirdoes, outsiders and misfits to their mutant pop.  Of course McLaran and Westwood using punk to plug their SEX wears is well-documented in the history of the Sex Pistols.  The Clash also enjoyed the sloganeering on their clothes.  And this style filtered into the scene, who donned the array of safety pins, piercings, spiky hair and ripped clothes which then rebounded back into the music when those fans became bands.

The next wave of UK82 punk fitted the generic pattern of painted leather, Mohawks, piercings and patches.   So what you get is a circular pool of style that rotates round.  The style evolves as bands inspire fans who become bands to inspire fans.

There are bands that take their costumes to extended lengths.  Devo’s post-punk discordant music is the soundtrack to their bizarre boiler suit appearance.  Aquabats present as a super-hero squad, and the late great Frank Sidebottom playing all his gigs adorned with a gigantic head like a warped crown.  Famously the Dead Kennedys lampooned the music industry with ties and shirts that portrayed $ signs.  Nowadays bands like Yorkshire’s Snakerattlers and Nosebleed perform in Americana blues get-ups to reflect their musical sound. 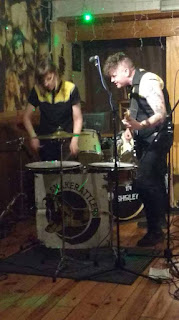 There is also something interesting about a rejection of a costume.  The Undertones local lads look of jumpers, parkas and jeans reflected their simple, but beautifully effective, pop-punk.  This uncomplicated honest presentation seems the opposite end of the spectrum to the star-spanglyness of rock and prog bands of the late 70s.  No time for glitter, go to pop down the park for a kick about.

Onstage, punks costume can signify unity and camaraderie (The Specials, The Ramones) or a spiky hotchpotch of influences and personalities (Rancid, The Clash).  It can be a fierce don’t-fuck-with-me-ness using the body with unflinching agency (Bikini Kill, G.L.O.S.S.) or invoke other styles and ideas (Mischief Brew’s romantic troubadour visage).  And of course, that is echoed outside of gigs in the ‘real world’.

The look becomes part of the act, it becomes visual as well as aural.  It becomes a whole parcel of identity.

When I got into punk, I remember owned about 5 t-shirts I loved dearly for a good period of time.  I didn’t put any patches on anything, I had a leather jacket and my love for the Ramones and desire to keep something clean and pure (like books) meant I didn’t want to paint it.

Eventually I went through a good few years really enjoying customising my clothes.  I have a hoody devoted to queer and feminist bands (adapted from an Against Me! Hoody).  I have a ‘nerd punk’ hoody, and folk-punk trousers.  Just like my love for exploring genre and eras, I do like defining my clothes.

The confidence of this look comes from championing these bands (and politics).  There’s a confidence that the Petrol Girls patch and Clash t-shirt and Sonic Boom Six hoody mean that the music has your back.  Quite literally, it’s on your back.

Though I’m very fortune and privileged to have never been verbally or physically assaulted, I do feel like my clothes attract attention.  I want this to be positive, as people clock some bands to check out.  But, of course, this attention can also be negative.  Let’s never forget the tragic death of Sophie Lancaster in 2007.

These days, punk fans tend to stick simply jeans and a t-shirt.  There’s other aspects, beards and converse, but it’s often simple a sea of black with the odd colourful logo at the centre of your stitching.

There’s a layer of scorn in the punk scene if you don’t dress as a punk outside of a punk/gig context.  As if you’re not maintaining the belief, the scene, the style.  You’ll only wear your heart on your sleeve when your heart’s in it.  But I like the relief of not always being in a turning-heads Punk Mode.  A privilege not everybody has, but one I do exploit when I want to be ‘unpunk’.

There’s a toxicity to fashion, and we should always be wary of peer pressure to dress and present a certain way.  But sometimes I just like black jeans and a classic t-shirt and some anonymity.  Sometimes I like to be a watching quilt of bands.  And actually, that choice is empowering and gives me confidence I have options and not just an uninspiring narrow blueprint.

I Think That I Shouldn’t Be Allowed To Open My Mouth: Punk & Confidence Part 1

I Think That I Shouldn’t Be Allowed To Open My Mouth:  Punk & Confidence Part 1

♪ I’ve felt conflicted and a lack of conviction/
I’d quit drinking but the beer makes me brave/
Here’s the half empty/
I’m always wrapped in thought my stomach tied in knots/ ♫
-Block Fort, The Half Empty https://blockfort.bandcamp.com/album/s-t

I’m going to try and write a series of blogs about the nature of confidence in punk.  The obvious arguments and the bizarre oxymorons.

OK, so let’s start with the obvious.  Punk bands own space.

Whether it’s the sneer of Rotten, the sweaty leg-pumping of Strummer, the macho domination of Rollins or the jarring dance of Ian Curtis.  Whether it’s fiery don’t-fuck-with-me-ability of Kathleen Hanna, the cool-and-sharp-as-ice-ness of Debbie Harry or the gobby-bog-off-authority vibe of Poly Styrene.  Robin Leitch’s ska-spider scampering and Ren Aldridge’s almost back-snapping screech.

What drives this confidence?  In many cases, it’s the fact that out in The Real World, many singers don’t take up space and yet, here, they have a platform to be demanding, to be brutish; to be heard.  Punk is a way to be something you’re not in the real world.

Take Joey Ramone.  If you ever watch interviews, you’ll see he’s a shy guy, hiding behind his massive scuzz of hair.  Joey had obsessive compulsive disorder and his rapidfire mutant pop was a form of expressing his insecurities with the world.

In the superb book Our Band Could Be Your Life, author Azerrad talks about how Beat Happening were a band of “shy, retiring people who would never normally walk onto a stage.”  Lead singer Calvin Johnson would dance, contort and gesticulate comically.  Their sound was a lo-fi jangly spiky noisy indiepop, more Smiths than Stooges.  Bret Lunsford said they were dismissed by some punks because they weren’t macho enough.  But despite the feyness of the bands appearance, sound and lyrics Azerrad tells of a gig where Johnson was hit in the face with an ashtray, yet continued his set despite blood streaming down his face.  At the end of the set, he walked right through the audience who parted like the red sea. 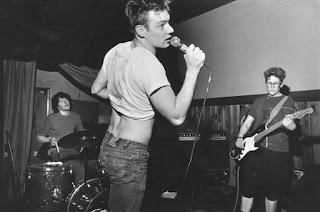 These days, it’s not uncommon for punk bands to not only sing about mental health issues, anxieties and depression, but to talk about them onstage, too.  The Smith Street Band, Caves, Shit Present, Happy Accidents, Chewing on Tinfoil, T-Shirt Weather, Crumbs, Perkie, MeRex, Block Fort, Muncie Girls, ONSIND, Martha, Ducking Punches to name but a few have discussed this openly.  Though I don’t know their work, of course the sad passing of Frightened Rabbit’s singer Scott Hutchinson is a reminder that the essential discussion about mental health shouldn’t just be limited to words in songs.

What is the rough connection between punk and confidence?  How does confidence manifest itself?
It is a comfort, a necessary and important outlet of rage, stubbornness and strength so that, for 30 minutes on stage, you are in command?  And the gig context:  How does the attitude of punk give you confidence in the day-to-day world?

Or are punk songs a way for artists to disguise their anxieties?  Act strong, act tough and act like you own the place as a distraction or disguise from the negativity on your head without really facing that insecurity?

Over the next few blogs I want to talk about the costume/disguise/character that punk offers, the immediacy of the 2.5 minute punk song and 25 minute set.  I want to talk about my own mental health and the oxymoron I struggle to be in social situations and meet new people, and yet find it very natural to stand before a bunch of strangers and be shouty.  The obvious and the oxymorons, the arrogance and the anxieties, the space-taking and the self-supporting.

If you have anything you want to add, please comment or get in touch via henry@henryraby.com.

Almost a week since we finished tour, here is (finally) my third (and final) blog about our adventure across this fair island.

Tuesday and Wednesday we played in Harrogate.  You might not imagine Harrogate to be a city hungry for a show about a riotous punk band trying to smash the system, and yet we had some lovely audiences well up for a bit of shouting and a bit of roaring.  First show we had Harrogate Youth Theatre coming along and joining in with some superb dinosaur impressions.  The next night was a battalion of friendly faces and a great way to finish off the show in Yorkshire.

But London awaited!  And many hours, many Lucozades and many crisps and sweets we finally arrived at the Big Smoke.  And across the run I saw many old friends from Youth Theatre days, University days and modern day punk/activist communities.  We had plenty of strangers too, coming along to see this Northern chap tell his story.

During the run it was announced Trump would be visiting the country in July, which helped with a little ripple of potential trouble-making to coincide with a show about resistance.  I did, of course, take time to pay extortionate London prices to see Avengers:  Infinity War where I topped up some Nerd Points after stacking up on Punk Points.

I can honestly say that every single audience were vastly different.  Some audiences were polite, respectful and really drew in the full story.  Others chatty, forward and became part of the DNA of the show. Some audiences really clicked with the world and characters, others found the Henryness of the show their way into the production.

I’m so proud of what we achieved.  No funding from Arts Council England, touring purely based on generous donations from audiences and the fees of the few theatres we were programmed into.  Me and Natalie have cemented ourselves as Vandal Factory and we’re dead proud of all the connections we made across the UK.  Thanks so much to everyone who programmed us, came to see the show or supported us in the venues.

Keep an eye out for Vandal Factory in the future with our upcoming shows, workshops and PLANS FOR MASS REVOLUTION. 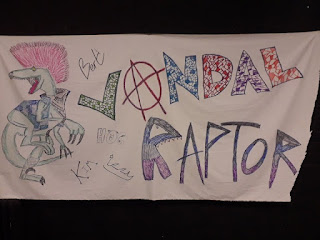